1.Ridesharing apps and services: as I highlighted in my last blog post, Ridesharing has exploded in popularity and seems to be the wave of the future. Uber, the ridesharing app and service, recently notched its 1,000,000,000 (one billionth) ride in its five-and-a-half years of existence.

Paris-based Blablacar, a ride-sharing app that allows people to book seats in other people’s cars, has raised $200m (£129m) in a funding round that values the company at €1.4bn, according to The Telegraph. And Waze launched a ride sharing pilot program in Israel.

Insurers looking to enter this market will need to offer a seamless experience to drivers, bring new products to market quickly and extract actionable insights from the mountains of data produced by ride sharing.

2. Car sharing (a bank of cars managed by a private entity, multiple drivers): car-sharing programs – where drivers can share their vehicles or borrow a car when necessary – are becoming increasingly popular.

For example, Zipcar empowers customers to reserve one of its cars online or via the mobile app, and then drive for a few hours (or the entire day). This 15-year-old company was launched before smart phones and social media existed!

3. Peer-to-peer car sharing (private individuals who are either renting or renting out their private cars): Turo, a San Francisco-based, peer-to-peer car rental service, recently raised 47 million dollars and is trying to become the Airbnb of the car rental world. Because cars are depreciating assets, many owners will be willing to try to make money from them. Turo requires a one-day minimum and says the average rental period is 5.5 days. 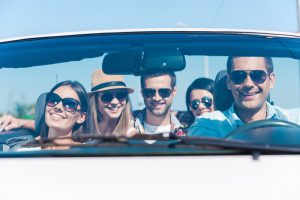 This kind of sharing can be covered by temporary insurance. According to Mirror.Co.UK, drivers can obtain temporary car insurance for a period between one and 28 days. Prices start at £20 for a day (up to a few hundred for a month) and are determined by the car and driver. One example is Cuvva, a new type of UK car insurance that covers a car for as long as the customer/driver needs it (from a single hour to a whole day)

4. Insuring electric bicycles: the electric bike is the fastest growing product in the cycling market, says David Miall of the British Electric Bike Association. As these bikes continue to proliferate around the world, insurers will vie to win over these customers and protect against the risks the bikes potentially create.

5. Self-driving cars: Tesla is two years away from building fully autonomous cars, CEO Elon Musk told Fortune in an interview. And yet many property and casualty/general insurers aren’t preparing for this huge industry development, according to a survey by research firm KPMG. In “Automobile insurance in the era of autonomous vehicles,” a survey based on months of market research and analysis, only 29 percent of company leaders feel very knowledgeable about driverless vehicles.

To harness all these trends in 2016 and stay ahead of their competitors, as well as to capitalize on the sharing across other verticals, P&C/GI insurers will need an effective and agile policy administration system. Such a system will enable them to go to market quickly with new products to meet evolving market needs, extract actionable insights from mountains of data and provide instantaneous and seamless customer service.

Asher Gilmour is Sapiens’ director of product marketing, P&C/General Insurance and Reinsurance division. He possesses a deep understanding of the insurance market and its trends, and extensive experience in designing software business processes and functionality for the insurance and financial services marketplace.
More Posts
<<Back to Blog